Srinagar, September 05 (Kashmir Voice): In occupied Kashmir, the Joint resistance leadership comprising Syed Ali Gilani, Mirwaiz Umar Farooq and Mohammad Yasin Malik has strongly condemned a notice issued to President of Kashmir High Court Bar Association, Mian Abdul Qayoom, by the Delhi-based, National Investigation Agency. According to media sources, terming the NIA notice to Mian Qayoom as fabrication tactics, the leaders in a joint statement in Srinagar said that such acts would serve nothing, but would further deteriorate the situation.  “Mian Abdul Qayoom is an honest and God fearing man; so every Kashmir has full faith in his integrity and honesty. Harassing the Bar leader is aimed at silencing him, because he is supporting the cause of people of Jammu and Kashmir and defending the detenues and under-trial prisoners who have been kept behind the bars without any trial,” the statement added.  The leaders urged India to realize that the legitimate struggle of the Kashmiris for their right to self-determination, which could not be wished away by such tactics and the people of the Jammu and Kashmir would not be subjugated through such oppressive measures. Meanwhile, the Kashmir Economic Alliance (KEA) in a statement termed the NIA probe a ploy and said the agency has become a tool in the hand of RSS to harass and muzzle the civil society faces in Kashmir. KASHMIR VOICE 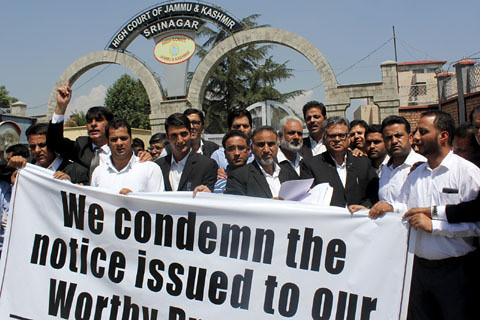