Srinagar, September 05 (Kashmir Voice): In occupied Kashmir, lawyers across the Kashmir valley suspended the court work, today, to protest against a notice issued to President of Kashmir High Court Bar Association Mian Abdul Qayoom by the India’s National Investigation Agency (NIA).
According to media sources, in line with the decision of the Kashmir Bar Association, all the District and Mufassil Bar Associations of the valley also abstained from court work, today. A High Court Bar Association spokesman in a statement in Srinagar while terming the notice to Qayoom as highly deplorable and condemnable, said the issuance of notice to the Bar President is aimed at harassing and demonizing the lawyers’ fraternity for supporting the cause of people of Kashmir and defending the detenues and under-trial prisoners before the High Court and the subordinate courts. “The Bar Association also feels that since it has taken a stand before the Supreme Court with regard to the use of pellets in Kashmir and is also getting arrayed a party to the petition filed by an NGO before the Supreme Court for striking down Article 35A of the Constitution of India, therefore, the NIA has issued a notice to the Bar President, so that the cases, which are now pending before the Supreme Court are not prosecuted and defended by the Bar Association,” the spokesman added. He said the NIA summon to Qayoom amounts to interference with the course of justice. KASHMIR VOICE 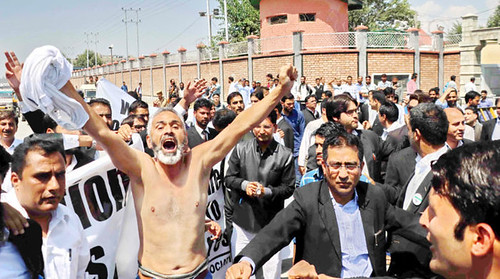