Srinagar, September 05 (Kashmir Voice): In occupied Kashmir, protests were held in Pulwama and Kulgam districts to express solidarity with the Rohingya Muslims in Myanmar. According to media sources, lawyers and students took out two separate protest rallies in Pulwama town against the persecution of Rohingya Muslims. The rallies were organised and taken out by Pulwama Bar Association and students of Government Boys Degree College Pulwama. Several lawyers and hundreds of students hit the main town in Pulwama and chanted slogans in favor of Rohingyas and demanded an end to the violence. Protests were also held in Kulgam district against the killings and persecution of Rohingya Muslims. The youth staged a march and raised slogans against the Myanmar government. KASHMIR VOICE 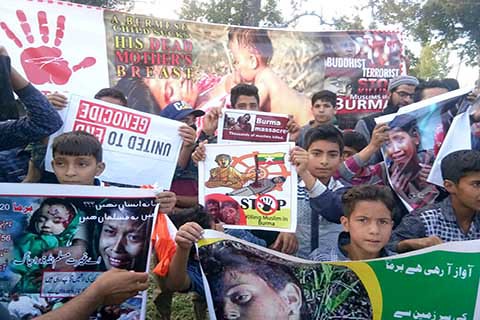