Jammu, September 08 (Kashmir Voice): In occupied Kashmir, normal life was affected in Chenab Valley, today, due to shutdown called against the killing of Rohingya Muslims and provocative statements of the Indian government over the Rohingya refugee issue.
According to media sources, shops and other business establishments and private schools of Muslim community remained closed due to the shutdown in Bhaderwah, Doda, Kishtwar and Thathri areas. The shutdown call was given by Anjuman-e-Islamia Bhaderwah, Markazi Seerat Committee Doda, Majlis-e-Shoura Kishtwar, Anjuman Islamia Bhalessa and Thathri to protest against the merciless killings of Rohingya Muslims in Myanmar by the government forces and mobs. The shutdown was also called to show resentment against Indian government for harassing Rohingya refugees and threatening to forcibly deport them at the behest of RSS. “This is really unfortunate that India, which calls itself as the largest democracy, is harassing and threatening to forcibly deport Rohingya Muslims to Myanmar, where hundreds of them are being killed every day and surprisingly the United Nations and human rights organizations have maintained a criminal silence, which is really unfortunate and uncalled for,” said Pervaiz Ahmed Sheikh, President of Anjuman-e-Islamia Bhadarwah. Shutdown is also being observed in Banihal town of Ramban district. All shops and other business establishments remained closed in Banihal town while traffic was off the road to protest the killing and persecution of Muslims in the Rakhine state of Myanmar. The High Court Bar Association of occupied Kashmir also staged a protest in Srinagar to denounce the killings. KASHMIR VOICE 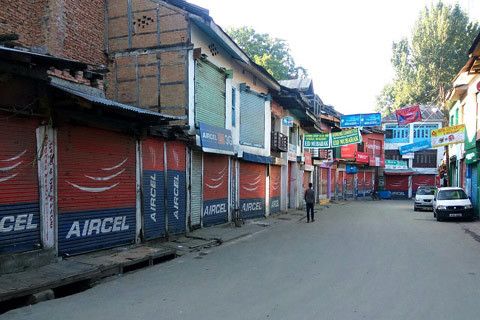