Srinagar, September 08 (Kashmir Voice): In occupied Kashmir, complete shutdown is being observed in Badgam town, today, against a raid by the sleuths of India’s National Investigation Agency on the residence of senior leader of All Parties Hurriyat Conference, Agha Syed Hassan Al-Moosvi Al-Safvi.
According to media sources, normal life was affected in the town today due to the shutdown call issued by Agha Syed Hassan Al-Moosvi Al-Safvi. All shops, business establishments and educational institutions are closed in the town. The NIA sleuths had yesterday conducted a raid at the residence of Agha Al-Moosvi which continued till late evening. The NIA officials had to flee in a hurry after hundreds of people raising pro-freedom and anti-India slogans held massive protests and stormed into the residence of the APHC leader. The protesters said that the NIA officials had misbehaved with Agha Syed Hassan Al-Moosvi Al-Safvi and his family and harassed them. KASHMIR VOICE 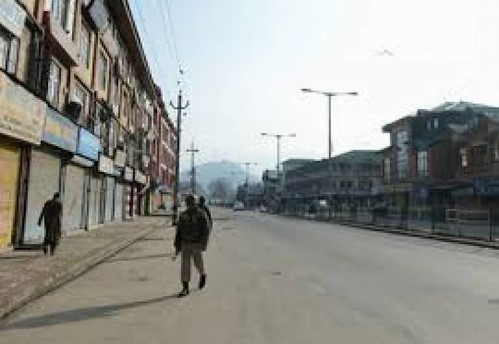