Srinagar, September 11 (Kashmir Voice): In occupied Kashmir, journalists staged a sit-in at press enclave in Srinagar against the arrest of photojournalist Kamran Yousuf by Delhi-based National Investigation Agency (NIA) and said that the charges against him should be made public.
According to media sources, journalists working with different media organizations assembled at press enclave in Srinagar and held a protest against the detention of a Kashmiri journalist Kamran Yusuf and asked for his immediate release.
Meanwhile, the journalists questioned the arrest of their colleague by NIA.
The journalists asked NIA to make the charges public. “NIA should come with charges leveled against Kamran,” they said. “Journalist fraternity should be at least informed why he has been arrested. What is the reason behind his detention?” Kashmir based journalist Naseer Ganie said. He added that Kamran has been arrested by NIA but nobody has been given any explanations regarding his detention. He asked the puppet administration to intervene. Covering protests, uploading pictures or videos, and reaching the spots first are no crime. It was his work for which no journalist or photojournalist should be arrested.” said journalist Majid Maqbool. Kamran Yousuf, a resident of Tahab; Pulwama, was arrested by the NIA on September 5, 2017 and flown to Delhi where a court sent him to NIA custody for 10 days. The journalists announced to continue their protests till Kamran is released. KASHMIR VOICE 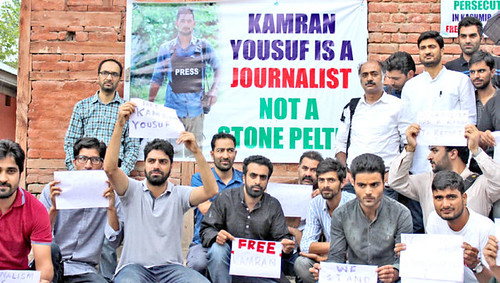