Srinagar, September 10 (Kashmir Voice): In occupied Kashmir, complete shutdown is being observed, today, against Indian Home Minister, Rajnath Singh’s visit to the territory.
According to media sources, call for the shutdown has been given by the joint resistance leadership comprising Syed Ali Gilani, Mirwaiz Umar Farooq and Muhammad Yasin Malik. All shops and business establishments are closed, while traffic is off the roads in Srinagar and other parts of the territory. The leaders in a statement issued in Srinagar said, “The strike is being observed by the people of Kashmir to prove to the world community and the Indian leadership that genuine people’s movement in Kashmir cannot be crushed by using military might or harassing the leadership.” Rajnath Singh arrived in Srinagar, on Saturday, on a four-day visit to the territory. Meanwhile, the authorities have imposed restrictions in areas falling under Rainawari, Khanyar, Nowhatta, Maharaj Gunj, SafaKadal and Maisuma police stations in Srinagar. Railway authorities have suspended train services between north Kashmir’s Baramulla and Jammu’s Bannihal towns. Forces’ personnel have been deployed in strength in Srinagar. The restrictions have been put at place to ensure peaceful visit by the Indian home minister. APHC Chairman Syed Ali Gilani continues to remain under house arrest while Mirwaiz Umar Farooq was placed under house on Friday night and JKLF Chief Mohammad Yasin Malik remains imprisoned at Central Jail, Srinagar. KASHMIR VOICE 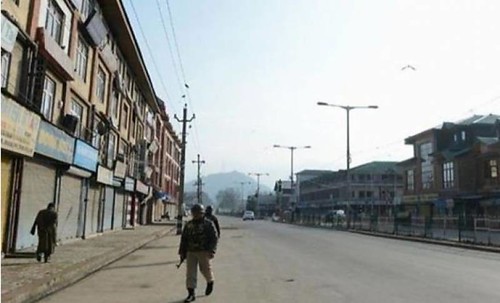