Srinagar, September 13 (Kashmir Voice): In occupied Kashmir, the High Court Bar Association has announced to observe strike from tomorrow against once again summoning of the Bar President, Mian Abdul Qayoom by India’s National Investigation Agency to New Delhi.
According to media sources, the HCBA in a statement issued in Srinagar said that the NIA move is aimed at harassing and humiliating the leadership of the lawyers’ body. It said that the Bar members would observe strike on 14th September, which would continue till return of Mian Qayoom from New Delhi.
As per the statement, the decision was taken at HCBA’s General Body meeting that was held in Srinagar.
“The purpose behind registration of the criminal case and raiding of houses of pro-freedom leadership and their activists and dragging them to New Delhi is to intimidate and threaten them so that they give up their support to the principled cause of people of Jammu and Kashmir and their inalienable right to self-determination,” the statement added. “Therefore, as a mark of protest, the Bar members shall observe strike on 14th of September, 2017 and continue the same till the Bar President would return back from Delhi. It was also decided that the lawyers would meet again on 15th of September in the High Court Bar room to discuss the issue further,” it added. KASHMIR VOICE 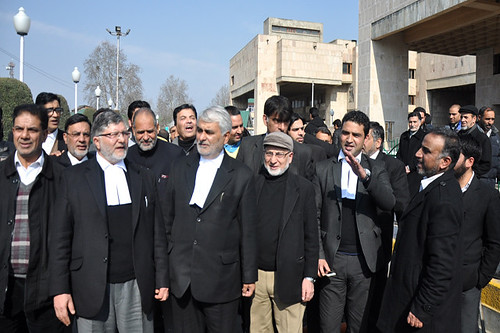