Geneva, September 13 (Kashmir Voice): Kashmiri representative, Syed Faiz Naqshbandi has apprised the international community about grim situation of human rights in occupied Kashmir.
According to media sources, Syed Faiz Naqshbandi in his statement submitted at the 36th Session of the Human Rights Council in Geneva informed the World Body that India did not allow a UN fact-finding team to visit occupied Kashmir as suggested by the High Commissioner for Human Rights to assess the human rights violations perpetrated by Indian armed forces in the territory. Syed Faiz Naqshbandi while appreciating High Commissioner’s report stressed the need to focus on the situation where territories were under foreign occupation. “There is grim situation of human rights in Indian occupied Jammu and Kashmir where on one hand, India does not allow UN fact finding team to visit Kashmir as said by the High Commissioner for Human Rights and on the other, the armed forces of India enjoy impunity. Confession before a police officer stands declared a valid confession in the Indian Evidence Act. Identity of a witness can remain secret which has resulted in fake trials. This situation has drastically increased human right violations in occupied Kashmir,” the statement said. The statement maintained that Kashmiri resistance leaders; Syed Ali Gilani, Mirwaiz Umar Farooq, Muhammad Yasin Malik and others were in continued detention, victimized and harassed by Indian forces and even not allowed to meet the people. He while urging the Council to play a role in ending the human rights violations called for sending a UN fact-finding mission to occupied Kashmir. Similar demands were made by other Kashmiri representatives including Shameem Shawl, Pervez Ahmed and Sardar Amjad Yousef in their statements. They asked the UNHRC to compel India to stop genocide in occupied Kashmir. KASHMIR VOICE 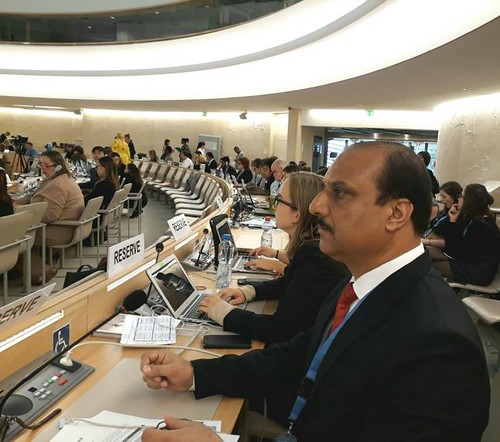 ← IOK HCBA to Observe Strike from Tomorrow
Solidarity with the Muslims of Rohingya. →