Srinagar, September 14 (Kashmir Voice): The Amnesty International (AI) has asked the National Investigating Agency (NIA) to come clear on the charges leveled against Kashmiri photojournalist Kamran Yousuf who was arrested by NIA, last week.
According to media sources, Shailesh Rai, Senior Policy Advisor at Amnesty International in a media interview in Srinagar said, “The reason for Kamran’s arrest does not seem to be public. NIA needs to reveal under what offence he has particularly been booked under.” “The only thing we seem to be hearing about his arrest seems to have been coming from unnamed sources quoted in newspapers.” “Some of the things that have come to fore is that Kamran has been arrested only for his Facebook posts and photographs,” Rai said. “If that that was the case for his arrest, then the charges under which he has been booked should be dropped and he should be released immediately,” Rai said. Kamran was arrested by the NIA and flown to Delhi where he is in NIA custody. He contributed photos/videos for Greater Kashmir newspaper from south Kashmir districts. Meanwhile, the AI team, which is in Srinagar, revealed that several Kashmir-based journalists were hit by pellets during the 2016 public uprising. “However, we have not been able to establish contact with the victim journalists,” said an AI member. “One Javid Ahmad was hit by pellets in eyes in Handwara; Tariq Ahmad of Kulgam, too, is a pellet victim, while photojournalist Zuhaib was hit by pellets in his eyes in Srinagar.” KASHMIR VOICE 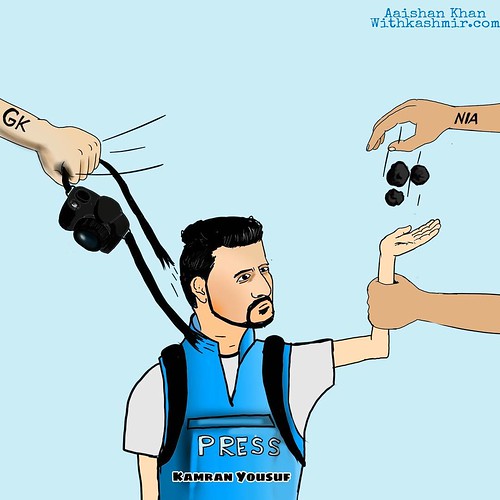