Srinagar, September 14 (Kashmir Voice): In occupied Kashmir, the Chairman of All Parties Hurriyat Conference, Syed Ali Gilani has said that pro-India Kashmiri parties are playing a dubious role in the people’s agitation against attempts to abrogate Article 35A of the Indian Constitution.
According to media sources, Syed Ali Gilani in a statement in Srinagar said these parties are exploiting sentiments of innocent people to retain and grab power. “For the past seven decades,” he added, “The subjugated people are suffering because of hypocritical behaviour of double dealers.” Cautioning people about their deceit, the pro-freedom leader appealed to common people not to fall in line of these political hypocrites and be steadfast and serious about the sacred freedom movement, for which Kashmiri people are offering innumerable sacrifices. Denouncing the National Investigative Agency (NIA) and the puppet regime in Kashmir, Syed Ali Gilani said that pro-freedom leadership including Shabbir Ahmed Shah, Altaf Ahmad Shah, Ayaz Muhammad Akbar, Pir Saifullah, Raja Meraj-ud-Din Kalwal, Farooq Ahmed Dar, Shahid-ul-Islam, Nayeem Ahmed Khan, Noor Muhammad Kalwal, Advocate Miyan Abdul Qayoom, Zameer Ahmad Sheikh, Kamran Yousuf, Sajjad Ahmed, Agha Syed Hassan Al-Moosvi Al-Safvi and Ghulam Nabi Sumji were either unlawfully detained in Tihar jail or had been summoned by NIA and their residences raided to scare and harass them. Hailing the meritorious services and sacrifices rendered by Dukhtaran-i-Millat chief Aasiya Andrabi and her personal secretary Sofi Fahmeeda, Gilani said, “We salute them for their steadfastness, persistence and commitment.” “India’s judiciary has failed to bring justice to these brave ladies who have repeatedly been bailed out by courts,” added Gilani. He also paid tributes to those lodged in jails and detention centres, and appealed to the International Committee of Red Cross, Amnesty International, and other global human rights watchdogs to use their influence for the immediate release of all detainees. Syed Ali Gilani also paid tributes to detainees lodged in Jammu and Kashmir and outside jails including. KASHMIR VOICE 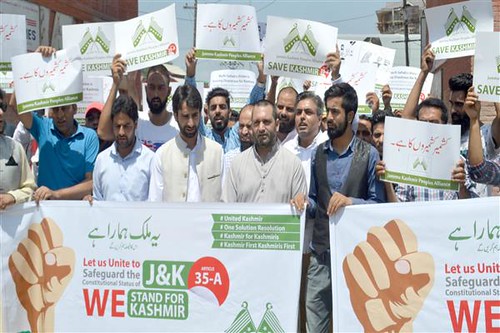