New Delhi, September 14 (Kashmir Voice): A Delhi court has extended the judicial custody of Hurriyat leader, Shabbir Ahmad Shah in a decade-old fake case.
According to media sources, Additional Sessions Judge Sidharth Sharma extended the custody of Shabbir Ahmad Shah till September 27 when he was produced before the court through video-conferencing after expiry of earlier custody. During the arguments, Shabbir Shah’s advocate M S Khan told the court that his client was not given proper medical and other necessary facilities in the jail. The court has sought a reply from the authorities concerned on Khan’s submission. Shabbir Shah was arrested by the Enforcement Directorate on July 26, a day after several Hurriyat leaders were taken into custody of the Indian National Investigating Agency (NIA). Meanwhile, the Democratic Freedom Party in a statement strongly condemned the extension in Shabbir Ahmad Shah’s judicial remand by two more weeks. A DFP spokesperson said the Shabbir Ahmad Shah remained in custody of by Enforcement Directorate the fact that he is suffering from various ailments. The statement said that Shabbir Ahmad Shah was being denied basic facilities including the food prescribed by doctors. On the other hand, after receiving summons, Dr Bilquies Shah, the wife of Shabbir Ahmad Shah, has left for Delhi to present herself before the Enforcement Directorate. She is repeatedly receiving summons from ED since the arrest of her husband. KASHMIR VOICE 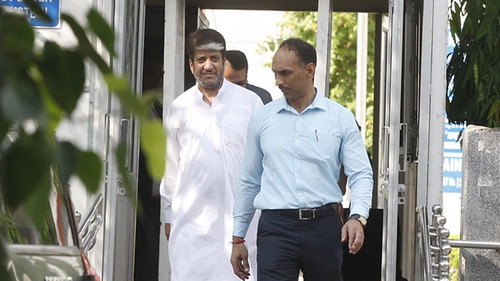