Srinagar, September 17 (Kashmir Voice): In occupied Kashmir, the Chairman of All Parties Hurriyat Conference, Syed Ali Gilani has flayed the puppet coalition regime for their divide-and-rule policy, asking it to desist from stirring communal sentiments in the territory.
According to media sources, Syed Ali Gilani in a statement issued in Srinagar said, “Interference and meddling in religious matters is a serious matter” and denounced the lockdown of Jamia Masjid, Srinagar, and barring the devotees from offering prayers. He said, “Such actions cannot be justified.” Terming the prevailing situation in the occupied territory horrendous, Gilani said, “Imperialistic and tyrannical forces for their political gains always exploit situations and instigate and promote infighting among different ethnic sections in society.” Gilani asked the followers of different faiths and religions to join right to self-determination movement irrespective of their faith and religion so that the long pending Kashmir was resolved as per people’s aspirations. KASHMIR VOICE 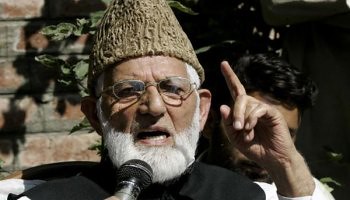