Srinagar, September 17 (Kashmir Voice): In occupied Kashmir, the joint resistance leadership comprising Syed Ali Gilani, Mirwaiz Umar Farooq and Muhammad Yasin Malik have expressed resentment over repeated and arbitrary imposition of curfew and restrictions in Srinagar and lockdown of central Jamia Masjid of the city.
According to media sources, the leadership in a statement issued in Srinagar said, “Locking down the central Jamia Masjid especially on Fridays to bar people from all across the Valley to assemble and offer prayers is aimed at weakening the centrality and significance of the grand mosque. The historic Jamia Masjid is not only the spiritual centre of confluence for the people of Kashmir but also representative of their political consciousness and aspirations.” “It is a deliberate attempt to silence the voice of truth and justice, raised from the pulpit of this historic mosque. All roads are blocked with concertina wires and hundreds of police and paramilitary men are deployed on Fridays to convert the whole area into a garrison,” they added. “The frequent curfews and restrictions have also taken a serious toll on the trade and the other activities of the people in Srinagar, which is the oldest business hub in Kashmir, and they are incurring huge losses. Students of the area are also made to suffer as they are caged,” the leadership said. The leaders expressed serious concern over the continued policy of oppression and persecution of the people by the authorities in one form or other. KASHMIR VOICE 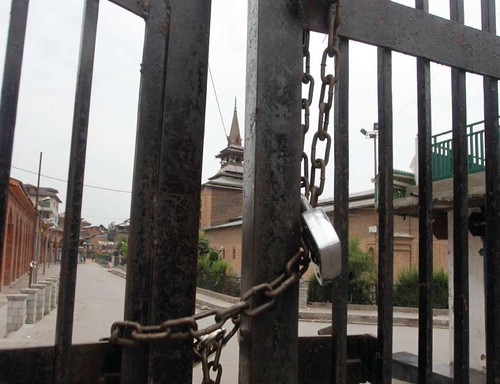