Srinagar, September 18 (Kashmir Voice): In occupied Kashmir, APHC Chairman, Syed Ali Gilani has urged the Organization of Islamic Cooperation (OIC) to play an active and effective role in resolving the issues faced by Muslim Ummah.
According to media sources, Syed Ali Gilani in a statement issued in Srinagar, while welcoming the statement of OIC on Kashmir, hoped that the organization would leave no stone unturned and would play an effective role in world politics. “There is a dire need to represent the divine message of peace and righteousness of Islam, and OIC is the best platform to promulgate and promote this message,” he added. Denouncing the Indian statement against OIC, wherein it has said ‘’OIC has no locus standi on Kashmir’’, Gilani said India is deliberately overlooking the historical background and facts related to Kashmir dispute. While hailing OIC for its stand on Kashmir, he urged the Muslim body to raise Kashmir at all international forums. Appealing to its member countries, Syed Ali Gilani asked OIC to present a unanimously agreed resolution in UN for settlement of Palestine and Kashmir issues. Syed Ali Gilani while favouring peaceful political settlement and situations in Middle East, said that member countries should ask the UN Secretary General to find ways and means to stop those oppressive forces responsible for prevailing bloodshed in the region. Hailing the Bar Association for its moral support for its President, Advocate Mian Abdul Qayoom, he said that each and every section of society should resent and resist sinister designs and stand firm against unauthorized, baseless allegations and defamation campaign launched by the Indian NIA. Paying tributes to Shaheed Aijaz Dar on his 29th martyrdom anniversary, Syed Ali Gilani said that he was a great warrior and a front line solider in freedom movement. KASHMIR VOICE 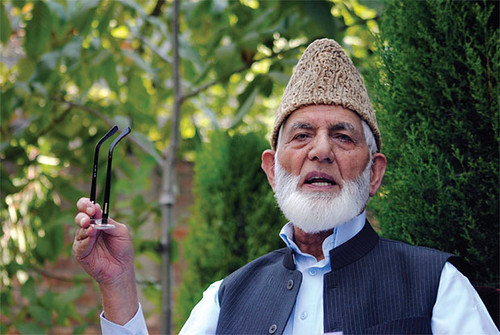