Srinagar, September 18 (Kashmir Voice): In occupied Kashmir, even after the deadline ended on Sunday, no one came to record statement in the killing of a youth in a fake encounter by Indian troops in Handwara on August 22.
According to media sources, this was confirmed by the magistrate investigating the killing of Shahid Bashir Mir. “Nobody came to record his/her statement till Sunday evening,” said Manzoor Ahmad Pir, the additional district magistrate Kupwara. He has been asked to investigate the case. “I will extend the time by 15 days now.” On August 22, a day after Shahid went missing from home, Indian soldiers had claimed that they killed a militant in Handwara forests. The slain later turned out to be Shahid Bashir Mir, a person with no militant records. The murder triggered massive protests in Daril, Tarathpora, Shahid’s native village, located 23 kilometers from Handwara town, against the staged encounter by the Indian army. “Now, I will visit Shahid’s home as well,” Pir said. Police have already stated Shahid was not a militant. His track record is clean. “The chapter of investigation has not been closed… date will be extended and the enquiry process is on,” Pir said. Shahid was a college student. His father Bashir Ahmad Mir is a carpenter and slain Shahid was his eldest son. KASHMIR VOICE 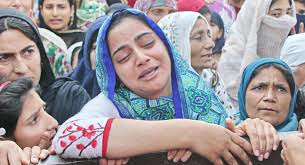 ← Year on, Justice Eludes Family of Aged Man Killed by Forces
Muslims of Jammu on the Target of Extremist Hindus →