Srinagar, September 19 (Kashmir Voice): In occupied Kashmir, despite worldwide criticism including the recently-made demand by the Amnesty International for complete ban on pellet shotguns, Indian Home Ministry has authorized its paramilitary forces including Central Reserve Police Force (CRPF) to use pellets and bullets as part of measures to tackle protesters in the territory.
According to media sources, paramilitary Central Reserve Police Force (CRPF) has now started training its men under a seven-point special operation procedure (SOP), approved by Indian Home Ministry, this year in March. The procedure also includes the use of lathi-charge, water cannon, teargas shells and rubber bullets against protesters. However, the seven-point procedure supposes that the forces would use pump action guns or pellet guns and bullets on lower body parts to control the protests. The decision about using pellets and bullets against protesters has been taken by Indian government despite sharp criticism from international human rights groups. The Amnesty in its recent report had said that pellets were being used in Kashmir only and called for complete ban on the use of this lethal weapon. Meanwhile, the CRPF is also planning to call Rapid Action Force (RAF) -specialized in crowd/ riot control – to provide further training to CRPF personnel. Interestingly, this is for the first time that RAF would be training CRPF in Kashmir. Earlier, RAF was called to help tackle mass uprising in 2010 in the occupied territory but it had virtually failed to bring any change in the situation. KASHMIR VOICE 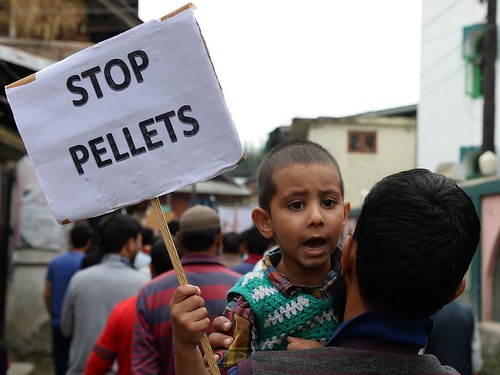