Srinagar, September 19 (Kashmir Voice): In occupied Kashmir, the joint resistance leadership (JRL) comprising Syed Ali Gilani, Mirwaiz Umar Farooq asnd Muhammad Yasin Malik, staged a protest in Maisuma area of Srinagar to condemn the India’s National Investigating Agency (NIA) raids, detentions and killings in the territory.
According to media sources, the protesters denounced the detentions of resistance leaders by NIA and arrest spree unleashed by Indian forces across occupied Kashmir. “Putting common people in jails and intimidations through NIA amounts to trampling of democratic and human norms,” said the protesters. They said that the people of Jammu and Kashmir who had been the wrath of Indian police and army for demanding their right to self-determination for the last 70 years could not be intimidated by jails, NIA and other acts of state sponsored aggression. KASHMIR VOICE 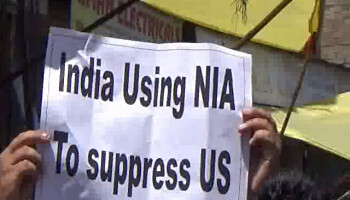