Srinagar, September 19 (Kashmir Voice): In occupied Kashmir, the Jammu and Kashmir Liberation Front Chairman, Muhammad Yasin Malik, has moved Human Rights Commission of the territory to seek the release of 15 juveniles, implicated by Indian police in the fake case of killing of a police officer in Srinagar in June this year.
According to media sources, Muhammad Yasin Malik in his petition submitted to the office of Human Rights Commission in Srinagar brought to the notice of Justice (Retd) Bilal Nazki, the Chairman of the rights body, the issue of 15 juveniles detained over the killing of DySP Ayoub Pandit. A statement issued by the JKLF in Srinagar said that Yasin Malik presented two petitions before Nazki, urging him to take serious cognisance of the arrests. In one of the petitions, the JKLF statement said, Yasin Malik raised the issue of dozens of young boys who have been falsely implicated by police in the lynching of DSP Ayoub Pandit in June 2017. In another petition, the JKLF Chief asked for fair treatment of Dukhtaran-e-Millat Chairperson, Aasiya Andrabi and her associate, Fehmeeda Sofi, who are lodged in a Jammu jail. Yasin Malik told the Commission that 15 detained boys – Aadil Siraj Misgar, Dawood Fayaz Zargar, Juwaiz Hassan Khan, Arooj Aafaq Butt, Iqbal Ahmad Khan, Arsalan Mushtaq Bangri, Seerat-ul-Hassan, Sheikh Khalid Rasool, Imran Nabi Wani, Owais Muneer Butt, Danish Rahim Mir, Sameer Ahmad Khan, Danish Ayoub Badoo, Musawir Butt and Bashir Ahmad Butt – met him at Central Jail Srinagar recently when he was lodged there and narrated their stories of innocence in the said lynching case. Emphasizing the need of a thorough investigation into the case and of a fresh unbiased enquiry into the cases of these young boys by the Commission, he appealed to its Chairman Bilal Niazki to use his good offices to save the lives and careers of these boys so that no injustice is done to them. Yasin Malik asked Niazki to take note of these gross human rights violations and ensure that the inmates are treated fairly. He further asked the rights body to look into the plight of thousands of Kashmiris languishing in various jails and police stations and take note of the use of black laws like PSA (Public Safety Act) against common people and peaceful political activists. KASHMIR VOICE 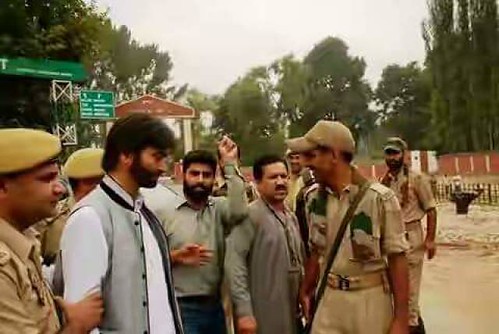