Srinagar, September 20 (Kashmir Voice): In occupied Kashmir, the Chairman of All Parties Hurriyat Conference, Syed Ali Gilani, has said that detention of people under draconian law, Public Safety Act (PSA), is a sheer violation of human rights and values.
According to media sources, Syed Ali Gilani in a statement in Srinagar said, under the garb of PSA, the puppet authorities and police feel free to detain anyone for years on flimsy charges and without providing any evidence. “It is ridiculous that the authorities while surpassing and neglecting their own rules and regulations dishonour and neglect the court rulings and directives,” he said.
The APHC Chairman said the authorities have adopted autocratic approach against the detainees and take refuge in a formal court order that “accused is released if not wanted in any other case” and hence the detainee is charge-sheeted repeatedly on fabricated grounds without taking consideration of provisions of justice and discourse of law. He expressed his deep concern over this increasing lawlessness in the territory. Syed Ali Gilani citing examples of Hurriyat leaders, Masarrat Aalam Butt, Aasiya Andrabi, Fehmeeda Sofi, Ameer Hamza and others said that they were being repeatedly detained despite their PSAs being quashed by the court. He appealed to the international human rights organizations to take cognizance of the matter and use their good offices for immediate release of all illegally detained Kashmiris languishing in different jails. Meanwhile, Syed Ali Gilani strongly reacted to New Delhi’s statement wherein it had linked Rohingya refugees with terrorism. He said that attributing terrorism to Rohingya Muslims was a grave injustice. He deplored that instead of providing aid and assistance on humanitarian grounds to these hapless refugees, the response and reaction from Indian authorities was heartbreaking and painful. The APHC Chairman hailing the international community said that they in a unanimous voice denounced callous approach of Myanmar authorities led by Aung San Su Kyi. “On the other hand, New Delhi is adding salt to their injuries and accrediting Rohingya with so-called terror threat and harping the tune of alleged terrorism and attributing it to Pakistan,” he said. Lashing out at New Delhi for its rhetoric and inhuman behavior with refugees and their blame game against Pakistan, Syed Ali Gilani said that it was ridiculous to involve Pakistan in every issue. KASHMIR VOICE 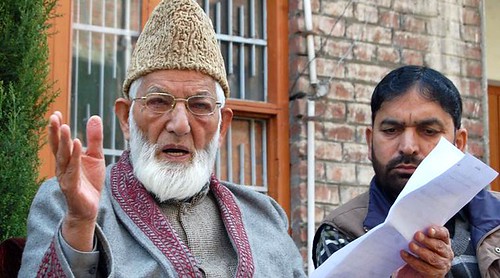