Srinagar, September 20 (Kashmir Voice): In occupied Kashmir, over five months have passed since a civilian, Farooq Ahmad Dar, was tied to the bonnet of an army vehicle as a human shield and was paraded around several villages in Badgam district but the police is yet to record the victim’s statement in the case they have registered over the incident.
According to media sources, this has been revealed in the police’s reply to a query filed under the Right to Information (RTI) Act. “The statement of the victim is required to be recorded,” the police have replied.
The police have been maintaining all along that they are conducting an investigation in the use of a civilian as human shield by the army. But the reply to the RTI query shows how sincere they are in this investigation. Farooq Dar, a tailor by profession, was caught hold of in Utligam village by army officer, Major Leetul Gogoi and his men on the day when the so-called parliamentary by-elections were being held in Budgam district on April 9, 2017. Dar was then tied to the bonnet of an army vehicle and paraded around the district. Major Gogoi later said that this was a tactic meant to prevent stone-pelting on army vehicles. While human rights groups like Amnesty International and Human Rights Watch had strongly condemned Major Gogoi’s act, Indian Army Chief, General Bipin Rawat, had rewarded the criminal officer with a commendation card. Several Indian ministers had also praised Gogoi for his inhuman action. The police also stated that they visited several villages through which Dar was paraded, in order to collect evidence. It said that after the collection of evidence, the “investigation will be done on merits (of the evidence)”. To the question asked in the RTI query that why the police had not returned the victim’s phone which he said the army took away from him, the police said that no such claims had been put forth by the victim before them. Farooq Dar has said in several interviews that Major Gogoi and his men had snatched his mobile phone and did not return it to him. KASHMIR VOICE 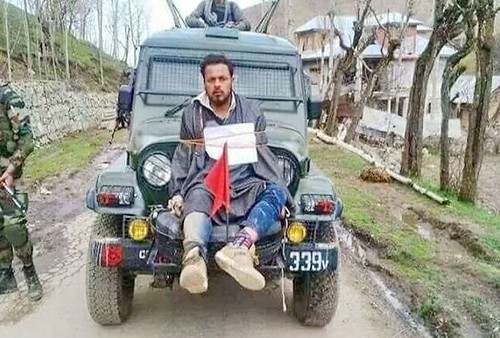