Srinagar, September 20 (Kashmir Voice): In occupied Kashmir, the Chairman of Jammu and Kashmir Peoples Political Front (PPF), Muhammad Musaddiq Aadil, has said that India cannot suppress the Kashmiris’ ongoing struggle for securing their right to self-determination through use of brutal tactics.According to media sources, Muhammad Musaddiq Aadil addressing a party meeting in Srinagar said that the current situation in occupied Kashmir was undoubtedly grim and was not less than any huge trial for the Kashmiri people. It is time when we should not lose heart and must not pay heed to the ongoing campaign of Indian media against our just freedom movement and Hurriyat leadership, he said.The PPF leader said that if the Kashmir dispute was left unresolved for some more time, it could prove disastrous not only for the people of Kashmir but also for the inhabitants of entire South Asia. He urged India to give up its traditional rigidity and initiate a meaningful dialogue with Pakistan and the genuine Kashmiri leadership to settle the lingering dispute for ensuring permanent peace in the region. Meanwhile, Hurriyat leader and the Working President of Jammu and Kashmir Muslim Conference, Jehangir Ghani Butt in a statement in Srinagar called for tripartite talks among Pakistan, India and the genuine Kashmiri leadership without any further delay to settle the Kashmir dispute. He said that people of Kashmir were masters of their destiny and resolution of the lingering dispute should be according to their aspirations. Jahangir Ghani Butt appealed to the world leaders attending the 72nd session of the United Nations General Assembly (UNGA) in New York to raise their voice for settlement of the Kashmir conflict. He reminded them that Kashmir is the oldest dispute on the UN agenda and the World Body should come together to resolve the Kashmir dispute according to the aspirations of the Kashmiri people. He said that the just settlement of the Kashmir dispute could bring progress and prosperity in the region besides establishment of cordial relations between Pakistan and India. KASHMIR VOICE 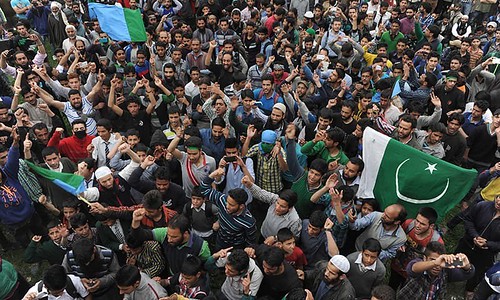