Srinagar, September 20 (Kashmir Voice): In occupied Kashmir, the High Court has directed the puppet administration to stop filling jails with under-trial prisoners beyond the capacity of the prisons.
According to media sources, the order came after the court went through a report filed by legal services authority of the territory. The report presented on Tuesday pointed out that Amphala Jail in Jammu with a capacity to incarcerate 398 persons has 559 inmates. It said that in Islamabad district jail, 146 prisoners had been kept while the capacity of the prison was just 64. In Srinagar Central Jail, 377 prisoners have been kept in a space meant for 364 prisoners, the report added. The division bench of Chief Justice Badar Durrez Ahmed and Justice Ali Muhammad Magrey issued the order while hearing a public interest litigation (PIL) on the jail inmates. It is to mention here that the puppet authorities have so far arrested more than 18,000 people during the ongoing mass uprising, which was triggered by the extrajudicial killing of popular youth leader, Burhan Wani, by Indian troops on July 8, 2016. Thousands of these detainees are still languishing in different jail while Indian police and troops continue the arrest spree across the occupied territory. KASHMIR VOICE 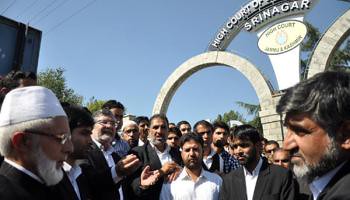