Srinagar, September 22 (Kashmir Voice): In occupied Kashmir, various Muslim organizations have condemned the continued curbs on the Muharram processions in the territory and demanded of the puppet authorities to lift the ban.
According to media sources, the meeting was presided over by senior APHC leader and the President of Jammu and Kashmir Anjuman Shari Shian, Agha Syed Hassan Al-Moosvi Al-Safvi, and was attended by the representatives of Mirwaiz Umar Farooq-led Hurriyat forum, Jamaat-e-Islami, Karwan-e-Islami, Majlis Tahafaz Itehaad and other organizations. Those participated in the meeting among others were Maulana Shams-ur-Rehman, Ghulam Muhammad Nagu, Tariq Ahmed Maki, Gulzar Ahmed Shaidayi, Ghulam Muhammad Hubbi, Ghulam Qadir Dar and Ghulam Rasool Hur. They paid glowing tributes to the martyrs of Karbala including Imam Hussain (RA) and his companions who laid down their lives for Islam. It is to mention here that traditionally main procession of 8th Muharram used to start in Srinagar from Shaheed Gunj and culminate at Dalgate after passing through different areas while the procession of 10th Muharram would start from Aabi Guzar and end at Zadibal. However, the occupation authorities banned these processions in 1990 and now only small mourning rallies are allowed in selected areas. Meanwhile, Vice Chairman of Jammu and Kashmir Peoples League (JKPL), Aijaz Rehmani, in a statement denounced the arrest of party Chairman, Mukhtar Ahmad Waza. He urged the world human rights bodies to take notice of the worst kind of terror unleashed by Indian forces in occupied Kashmir. KASHMIR VOICE 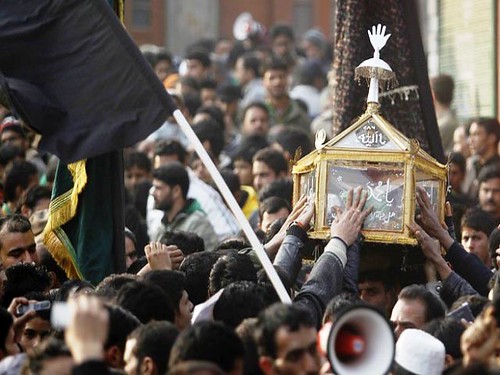