New York, September 24 (Kashmir Voice): Hundreds of Kashmiri Americans held a huge rally in front of the United Nations during the speech of the Indian delegate at the General Assembly.
According to media sources, raising slogans of “India: Honor UN Pledges”, “Freedom for all, Freedom for Kashmir” Indian Forces: Out of Kashmir” “Time to Resolve Kashmir Dispute Now” “Kashmir: The Nuclear Flashpoint” “No Justice, No Peace”, the demonstrators demanded of the United Nations to facilitate the assured right of self-determination to the people of Kashmir.
Dr. Ghulam Nabi Fai, Secretary General of World Kashmir Awareness Forum, responded to Sushma Suraj’s mantra of resolving all outstanding issues bilaterally said, “Sushma Suraj ji seeks to propagate the impression that The UN resolutions have been superseded by the Simla Agreement. That implication is false and it can be readily seen from a comparison of the two texts (UN resolutions & Simla Agreement). But even if it were true, it would run counter to a standing principle of international relations which is set out in Article 103 of the Charter of the United Nations (accepted by every Member of the United Nations, including India). The Article says: “In the event of a conflict between the obligations of the Members of the United nations under the present Charter and their obligations under any other international agreement, their obligations under the present Charter shall prevail”
“Despite this circumstance, Fai added, “The Simla Agreement nowhere precludes a settlement of the Kashmir dispute along the lines laid down by the United Nations with the consent of both India and Pakistan. Nor does it require that the United Nations be by-passed in the effort towards a settlement.”
“On the contrary, it expressly says that the relations between the two countries shall be governed by the principles and purposes of the Charter of the United Nations,” he said and added, “One of the basic principles of the Charter (Article 33) is to seek a solution of any dispute by negotiation, enquiry, conciliation, arbitration, judicial settlement, resort to regional agencies or arrangements or other peaceful means.” “The Agreement thus reinforces the obligations of both parties to achieve a settlement in accordance with the resolutions endorsed by the Security Council and, if their bilateral efforts fail, to turn to the United Nations for assistance. Nothing would be more contrary to the Charter — and, therefore, to the Simla Agreement itself — than to bar recourse to the United Nations,” he further said. Messages from Syed Ali Gilani and Muhammad Yasin Malik were also read out to the demonstrators on the occasion. Former AJK Prime Minister, Barrister Sultan Mehmood Chaudhary declared that, “since its nationhood secured on August 15, 1947, Kashmir has been despoiled, defiled, and devastated by foreign military troops and denied its fundamental right of self-determination. The nuclear danger in South Asia will never recede until Kashmiris receive the justice and political liberty promised by the series of United Nations Security Council resolutions providing for a free and fair self determination vote.” Mr. Ishtiyaq Hameed, Representative, All Parties Hurriyet Conference said “All our basic rights and civil liberties have been snatched by Indian forces.” Dr. A. R Meer form Baramulla, said the people of Kashmir believe that the time has come that the Secretary General of the United Nations use his good office to let India and Pakistan know that if talks between these two countries are to mean anything, they must be accompanied by practical measures to restore an environment of non-violence, free from state sponsored terrorism. Saleem Qadri, from Srinagar, said Kashmir has been plagued by conflict since 1947 for a simple reason of denial of self-determination. Sardar Taj Khan cited the example of the widespread human rights violations by the Indian military and paramilitary forces in the disputed territory of Jammu and Kashmir. Sardar Imtiaz Khan Garalavi said the cause of Kashmir’s chilling strife and turbulence is the denial of self-determination. Saleem Butt, Dr. Asif Luqman, Sardar Tahir Iqbal, Raja Liaqat Kiyani, Noreen Talat, Amina Taj Khan, Sardar Zulfiqar Roshan Khan, Sardar Zubair Khan, Sahibzada Imtiaz Zafar, Sardar Sawar Khan and several others also spoke on the occasion. KASHMIR VOICE 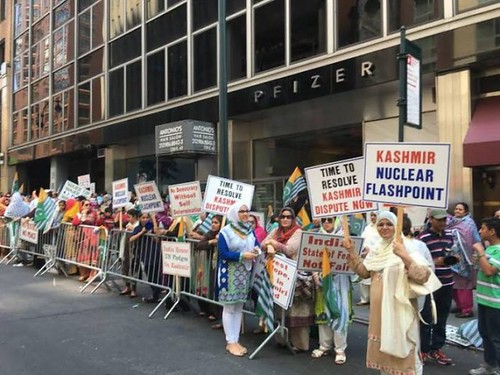