Srinagar, September 22 (Kashmir Voice): In occupied Kashmir, the Chairman of Jammu and Kashmir Liberation Front (JKLF), Muhammad Yasin Malik has said that suppressing Kashmiris’ voices by killings and incarcerations by India is no democracy but the worst kind of dictatorship. According to media sources, Muhammad Yasin Malik addressing a mammoth gathering at Jenab Sahib in Soura area of Srinagar, today, said only oppressive authoritarian regimes keep people in jails. He said, India and its stooges should know that suppression and oppression can never undermine people’s struggle but strengthen the resolve and passion of the oppressed people. Without any prior announcement, the JKLF Chairman arrived at Aanchar, Soura, and led a protest rally as show of solidarity with thousands of Kashmiris languishing in jails and police stations and against the ongoing persecution of Muslims in Myanmar. Speaking to people on the occasion, he said Kashmiris languishing in jails and police stations are prisoners of conscience. He said that the so-called largest democracy of the world and its stooges in occupied Kashmir had detained thousands of young and old, men and women in the name of maintaining peace and law and order. Black laws like PSA and investigating agencies like NIA are being used to jail and intimidate people, he added. Condemning the ongoing massacre of Muslims in Myanmar, Yasin Malik said humans are being killed, raped, looted and persecuted with impunity and state of Myanmar is engaged in ethnic cleansing of an entire nation. International community has stood as a mere spectator on this mass killing, he maintained. Expressing solidarity with Muslims in Myanmar, he said Muslims are like one body and one soul and any Muslim facing hardship anywhere in the world should pains us. Stressing the need for immediate international intervention in this matter, he said that failure of international community in resolving the disputes, issues and matters confronting humans had jeopardized the peace, prosperity and tranquility of the whole universe. KASHMIR VOICE 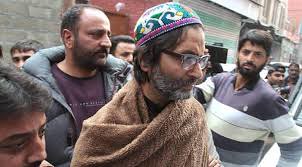 ← Talks for Kashmir Solution will be Fully Supported: Mirwaiz
Curbs on Muharram Processions in IOK Denounced →