Srinagar, September 24 (Kashmir Voice): In occupied Kashmir, transporters and trade bodies have called for complete shutdown tomorrow (Monday) against the summoning of Kashmir Traders and Manufacturers Federation (KTMF) President, Muhammad Yasin Khan, by India’s National Investigation Agency (NIA).
According to media sources, addressing a press conference in Srinagar, representatives of KTMF, Kashmir Economic Alliance and transporters called for complete shutdown to protest against the NIA notice. “They can record statement of a witness in Srinagar as well,’’ said KTMF, acting President Manzoor Ahmad. “It is not only notice to our president only but also we see that 50 lakh traders of the Valley have been put on notice. It is an attempt to muzzle the voice of traders,’’ he said. Ahmad added that the “Summons are nothing but only harassment of the business community member and to make him suffer for no fault.”Manzoor said that Mehbooba Mufti led puppet was wholly responsible for the raids.The NIA has summoned Muhammad Yasin Khan to its headquarters in New Delhi, tomorrow. Yasin told media persons in Srinagar that he would cooperate with the NIA as there was nothing to be scared about. “I am going to visit NIA headquarters in New Delhi on Monday. I am a business leader and not scared of NIA as I have done nothing wrong,” he added. On the other hand, the NIA has also summoned the Kashmir University scholar, Aala Fazili, to its headquarters in New Delhi, tomorrow. Fazili, a resident of Humhama, is perusing Phd in Pharmacy department of the varsity. Fazili in a media interview said, “I don’t know why I have been called for questioning. I have never been summoned in any case by local police. I don’t know what this is all about.” KASHMIR VOICE 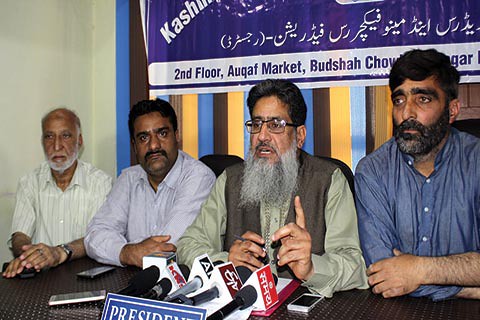