Srinagar, September 25 (Kashmir Voice): In occupied Kashmir, the Chairman of All Parties Hurriyat
Conference, Syed Ali Gilani while hailing the statement of Pakistani Prime Minister Shahid Khaqan Abbasi on Kashmir in the UN General Assembly, has said that his address was eloquent, apt and represented the aspirations of the people of Jammu and Kashmir.
According to media sources, Syed Ali Gilani in a statement issued in Srinagar also appreciated Pakistan for its moral support to the Kashmir cause and said the country has always raised Kashmir issue at all the international forums and stressed its resolution through meaningful dialogue and as per the aspirations of people of Jammu and Kashmir. “It has been proved that Pakistan is a sincere and well-wisher for people of Jammu and Kashmir,” the APHC chairman said and stressed the international community to resolve the Kashmir dispute without any further delay. Criticizing Indian authorities for their haughty approach, Gilani said New Delhi always opted to use coercion to prolong its illegal occupation; however, has failed to suppress the freedom sentiments of people. KASHMIR VOICE 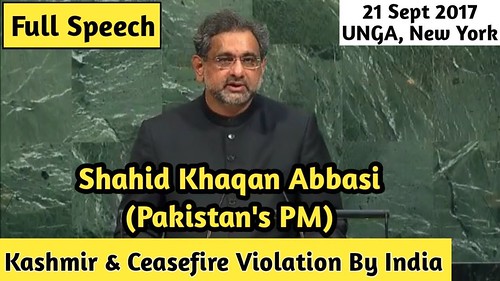 ← NIA, ED’s Moves Bound to Fail: Mirwaiz Forum
Pakistani and Kashmiris are one. →