Srinagar, September 25 (Kashmir Voice): Overwhelming presence of Indian army along the Islamabad-Srinagar stretch of the Jammu-Srinagar highway and their frequent altercations with civilians has left commuters as well as locals concerned for their safety.
According to media sources, traffic on the highway has often come to a grinding halt for hours at a stretch, with people coming out in protest against the army’s highhandedness. Ambulances, patients, students and other commuters have been bearing the brunt of such impasses. According to locals and commuters, army presence on the highway has grown manifold in the past few months. “Not only do they manage the traffic, they also grow impatient with civilian commuters,” locals told newsmen. They said that many people in the past few months had been beaten up by army soldiers, sparking protests in the particular area. On certain occasions, locals said, drivers have been thrashed for overtaking an army vehicle, or for not stopping at the orders of an army man. “The driver sometimes fails to see the signal (to stop),” locals said. “I have been driving a Sumo (jeep) on the highway for more than 15 years now. Never in all these years have I felt as unsafe as I feel now,” a driver, requesting anonymity, told newsmen. Several other drivers said that for more than two months now, the army had been halting traffic every time their convoy passes through. “Even ambulances and school buses are made to halt,” local said. KASHMIR VOICE 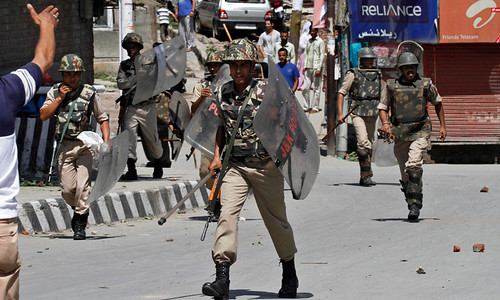