Jammu, September 26 (Kashmir Voice): In occupied Kashmir, Jammu Muslim Front has condemned the puppet administration for allowing Hindu extremist organizations to take out armed rallies in Jammu on the pretext of birth anniversary of Maharaja Hari Singh.
According to media sources, as per a statement, JMF Chairman, Shuja Zaffar and President Imran Qazi said that many members of minority communities met them and expressed their concern over growing sense of insecurity among the minorities.
They urged the puppet regime to investigate as to why these armed rallies were allowed. “We don’t know whether the administration would have allowed similar armed rallies if anyone else had tried to do so. How can they turn their blind eyes towards the safety of the minorities?” the Front leaders asked.
Members of extremist Hindu organizations carrying swords and guns took out motor car rallies in Jammu.
The JMF leaders said that the armed rallies had put a question mark on the credibility of the so-called administration and police. “Many have seen these armed rallies as threat to minorities and no one is ready to question them. The administration instead of implementing law and order facilitated the rally. Such rallies have become a symbol of threat to other communities. In democratic system, the administration should be run under the law not with the swords or guns,” they said while expressing their strong resentment. KASHMIR VOICE 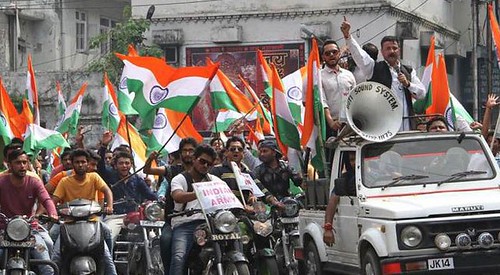