Srinagar, September 26 (Kashmir Voice): In occupied Kashmir, a fresh petition was filed against the puppet regime for failing to comply with the directions of Human Rights Commission of the territory of granting compensation to Farooq Ahmad Dar, who was tied to an Indian army jeep as a human shield.
According to media sources, the commission had directed the puppet authorities to grant a compensation of one million rupees to Farooq Dar to be paid within a period of six weeks. The compliance report was also to be filed within six weeks, but no action has been taken so far while more than two months have passed since the directions were passed by Justice Bilal Nazki, the Chairman of the commission.
The Chairman of International Forum for Human Rights and Justice, Muhammad Ahsan Untoo, who filed the petition against the chief secretary of the occupied territory, in an interview in Srinagar said, it is crime on part of the puppet administration that they are taking this matter very lightly. “It is a human rights issue and by these tactics you are giving freehand to people like Major Gogoi to carry out more such acts,” he said. The commission will hear the fresh petition on October 3. Farooq Dar, a resident of Badgam village, said that he had not received any compensation. Meanwhile, police has negated the assertions made by Indian army Major Leetul Gogoi that Dar was a stone thrower, and confirmed that he was going to visit his relatives when the incident took place in April this year. KASHMIR VOICE 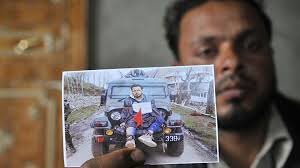