Jammu, September 26 (Kashmir Voice): In occupied Kashmir, a three-member delegation of Jammu and Kashmir Peoples Movement led by its Chairman, Mir Shahid Saleem, visited the All Parties Hurriyat Conference Chairman, Syed Ali Gilani, in Srinagar and enquired about his health.
According to media sources, the delegation apprised Syed Ali Gilani of the prevailing political situation in Jammu region. Mir Shahid Saleem on the occasion informed the ailing leader that Muslims in the region were being pushed to the wall since the formation of RSS-backed PDP-BJP puppet regime in the occupied territory. Mir Shahid Saleem further said that now all administrative offices were held by RSS goons in the region. The delegation said that Hindu extremists were targeting Rohiyngia refugees in Jammu. Syed Ali Gilani while expressing concern over the plight of Rohingya Muslims urged people to extend their full support to the beleaguered Rohingyas. Meanwhile, Hurriyat leaders Muhammad Yousuf Naqash and Hakim Abdul Rashid in a joint statement while expressing concern over the tension between India and Pakistan have said that this kind of situation besides posing dangerous threat to the world peace was very badly impeding the prospects of friendship, reconciliation, peace and stability in the region. KASHMIR VOICE 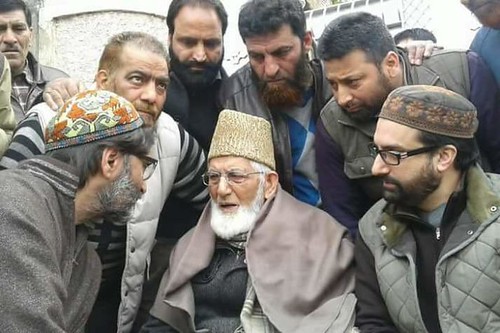