Srinagar, September 27 (Kashmir Voice): In occupied Kashmir, a large number of people participated in the funeral prayers of a martyred youth in Batpora area of Sopore.
According to media sources, the youth identified as Abdul Qayoom Najar was martyred by Indian troops during a cordon and search operation in Lachiproa area of Uri in Baramulla district, yesterday. He was laid to rest in his ancestral in Batpora village amid pro-freedom and anti-India slogans. Two rounds of funeral prayers were offered for the youth. Meanwhile, the authorities imposed restrictions in Sopore town to prevent protests against the killing. The forces were deployed in strength and Main Chowk, Tehsil road, Court road and Chanakhan areas were sealed with concertina wires. KASHMIR VOICE 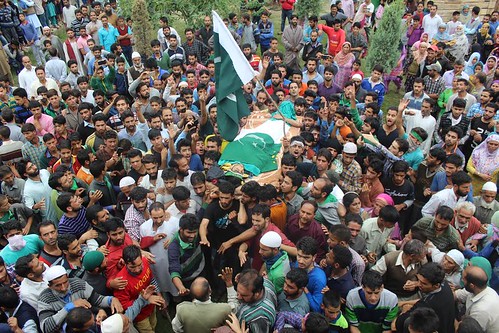