Srinagar, Sep 28 (Kashmir Voice): In occupied Kashmir, after facing loss of vision, many victims blinded by the pellets are now grappling with loss of memory which could take an ugly turn if the treatment is ignored, doctors and experts have warned.
According to media sources, the doctors said that the pellet victims could face permanent memory loss if they don’t turn up for the treatment, which includes effective counseling and cognitive therapies. Shabroza Mir from Rohmoo in Pulwama was hit by a volley of pellets inside her home during the 2016 uprising triggered by the killing of prominent young liberation leader, Burhan Wani. “I was not even protesting when I was hit by pellets,” she said. Her face and eyes were left peppered with the lead-coated metal balls. Repeated surgeries have restored partial vision in her left eye. The other eye is dead, according to the doctors. Other pellet-blinded persons like Danish Rajab Jhat of Rainwari, Srinagar, and Manzoor Ahmed of Pulwama are experiencing similar problems. A burst of pellets fired by the police reduced Danish’s eyes to a mangled mass of soft tissues, a doctor said. Repeated surgeries have not helped him and he now needs help in moving around. “I am blind now,” he sighed. “Now I don’t remember anything, not even the names of my family members. Pellets snatched my vision and now I am struggling with memory loss.” Xuhaib Humza, a young photographer from Srinagar, said that after being hit by pellets in September 2016, light started playing hide and seek with him. “Depression, trauma, darkness, pain, numbness of emotions and memory loss are things I started going through since the day I was hit,” he said. Xuhaib has a blurred vision in one of his eyes. Dr Tariq Qureshi, who heads the department of Ophthalmology at SMHS hospital in Srinagar, said that pellets have damaged the eyes of many youths. “It is a sad story,” he said. “Figures itself speak about the extent of damage inflicted by the pellets. The damage caused pellets is rare and can’t be seen anywhere in the world, except Kashmir.” Kashmir’s leading psychiatrist Dr Arshad Hussain while commenting on the fresh challenge being faced by the pellet victims in Kashmir said that memory problems in people with “traumatic life experiences” are either because of “dissociative amnesia” which is many a time part of their post-traumatic stress disorder (PTSD) or because of declarative memory problems and also due to concentration difficulties because of re-experiencing. KASHMIR VOICE 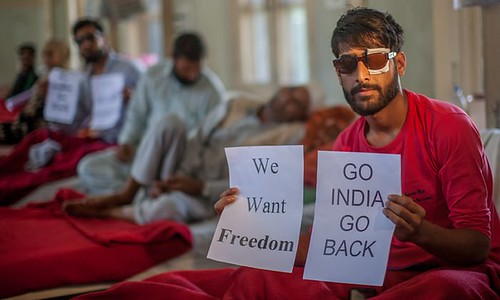