Srinagar September 28, (Kashmir Voice): In occupied Kashmir, the Vice-Chancellor of Kashmir University, Professor Khurshid Iqbal has dispatched a letter to the puppet Chief Minister, Mehbooba Mufti and Director General of Police SP Vaid over the questioning of the varsity’s PhD scholar, Aala Fazli, by the Indian National Investigation Agency (NIA) in New Delhi.
According to media sources, a senior KU official in a media interview in Srinagar said that the VC had assured the student of help and had taken up the issue with the highest authorities. Fazli is a PhD scholar at the Department of Pharmacy at the KU. He was summoned by the NIA to New Delhi on Monday and since then he has been questioned as a witness for three consecutive days in a fake case that the NIA has registered. Meanwhile, Aala Fazli’s teacher and PhD supervisor at the Department of Pharmacy at Kashmir University said that Fazli was a recipient of the Maulana Azad fellowship and had presented papers at several conferences, including one held in Poland, “He recently attended an international conference in Poland,” said Prof ZA Zulfi, Head of Department (HoD) Pharmacy. “He is a very good researcher,” said the professor who is supervising Fazli’s research. KASHMIR VOICE 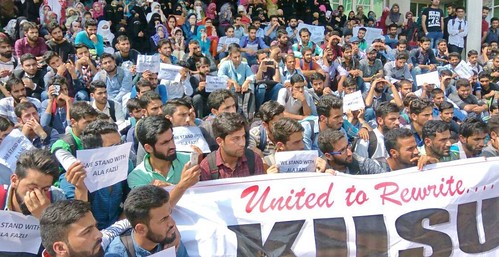