Srinagar, Sep 28 (Kashmir Voice): In occupied Kashmir, students of the Central University of Kashmir Nowgam ‘campus 1’ staged protest against the summoning of Kashmir University research scholar by the Indian federal investigation agency, national investigation agency (NIA) . According to media sources, hundreds of students raising slogans against the Indian investigation agency marched from the ‘campus 1’ of the university to ‘campus 3’ at main Nowgam chowk. Carrying banners reading, ‘I am Aala, Go India Go Back and Stop NIA Stop’, students also raised slogans in favour of ‘Aazadi and Aala Fazili’. The students are demanding immediate end to the unwarranted questioning of the Kashmir University scholar Aala Fazili. Fazili was summoned by the on Friday last. He landed in Delhi on Sunday and has continuously appeared before the agency, since then. Pertinently, students of Kashmir University and Islamic University and Islamic University students also held protests against the unwarranted questioning of Aala Fazili. Meanwhile, complete shutdown are being observed in Sopore and in Tral areas to mourn two martyrs. All shops business establishments remained closed in the towns while as traffic was also off the roads. KASHMIR VOICE 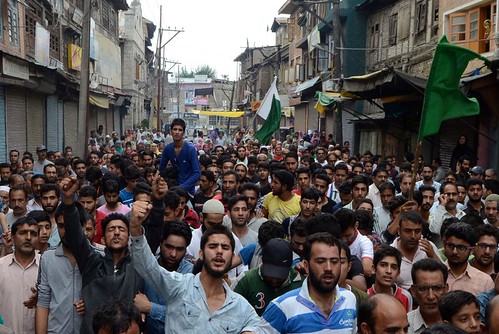