Brussels, September 29 (Kashmir Voice): The Chairman of Kashmir Council European Union (KCEU), Ali Raza Syed has praised the Rafto Foundation of Norway for conferring its award of 2017 to two leading Kashmiri human rights defenders.
According to media sources, Ali Raza Syed in a statement issued in Brussels said that conferring of the internationally famous award to Parvez Imroz and Perveena Ahangar was worldwide recognition of the rights of Kashmiri people. He said that the two human rights activists refused to accept the violation and abuses of human rights in occupied Kashmir and they were struggling to protect the rights of the oppressed people of Kashmir for a long time. “It is acceptance of their great work for a noble cause of Kashmir. They exposed the violence against those want freedom from Indian occupation in Kashmir,” he added. The KCEU Chairman said Parvez Imroz and Perveena Ahangar are such people who teach peace and work for peace and human rights. They raise their voices against state terrorism and severe brutalities committed by Indian forces’ personnel in occupied Kashmir. Ali Raza Syed underlined that the initiative of Rafto for giving award to the Kashmiri activists prove that crimes against humanity including harassment of women and children has no place in the civilized world. This award is not just for two Kashmiris but it is for whole Kashmiri people who are facing the Indian atrocities in occupied Kashmir as well as for all the people who are engaged in the struggle for securing their rights in the occupied territory, he maintained. The KCEU Chairman hoped that the award will give more awareness about the Kashmir dispute and would give more voice and courage to the voiceless people of occupied Kashmir. He urged the international community, especially the United Nations and the EU, to help stop human rights violations by Indian troops in occupied Kashmir and take step for a peaceful resolution of the lingering Kashmir dispute. KASHMIR VOICE 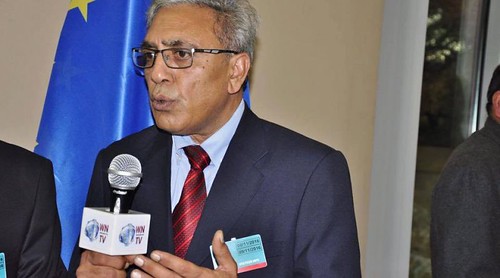