Srinagar, October 04 (Kashmir Voice): In occupied Kashmir, the Chairperson of Kashmir Tehreek-e-Khawateen, Zamruda Habib, has asked the puppet Chief Minister, Mehbooba Mufti, to shave her head off as she has failed to identify the culprits of growing incidents of braid-chopping across the territory. According to media sources, Zamruda Habib in a statement issued in Srinagar said that Mehbooba Mufti should shave her head off if braid-choppers were not identified. â€œThis should not be just seen as the braid-chopping incident. It is an attack on the dignity and chastity of womenfolk of highly militarized zone of the world,â€ she said. â€œThese horrible tactics are used to create fear psychosis among women and girls and these things happened here in past when in â€œOperation Bhootâ€ the Indian forces used to hit women with sharp iron gloves and facilitated by gypsies to ran away this is not mystery but obvious that some agencies are behind these incidents. We want to ask our social and religious leaders to come forward jointly and take this matter seriously because it can take very ugly shape to humiliate and disgrace the women of Jammu and Kashmir,â€ she added. Zamruda Habib said that rather than blame-game over tragic incidents, the puppet administration must come clean and identify the culprits and deliver justice in this regard. Meanwhile, the spokesman of Muslim Deeni Mahaz in a statement in Srinagar said that the tyranny meted out by notorious Ikhwani Kukka Parray and incumbent puppet Chief Minister, Mehbooba Mufti, to the people of occupied Kashmir had no match. He said that under the directives of Mehbooba Mufti the ailing Dukhtaran-e-Millat Chairperson, Aasiya Andrabi, was not being produced before the court. KASHMIR VOICE 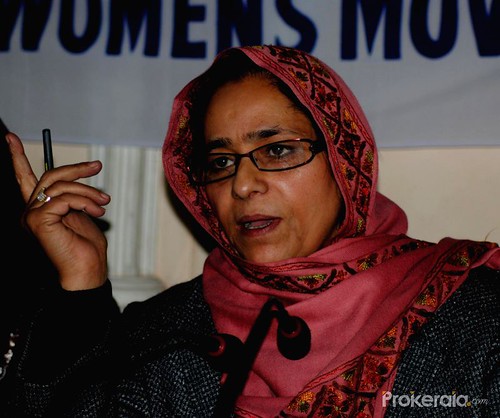