Srinagar, October 04 (Kashmir Voice): In occupied Kashmir, the Hurriyat forum led by Mirwaiz Umar Farooq has expressed serious concern over the increasing tension between Pakistan and India on the Line of Control (LoC).
According to media sources, the forum spokesman in a statement issued in Srinagar said that the bitterness between the two countries and the war like situation between their armies facing each other in Jammu and Kashmir was only because of the lingering Kashmir dispute. He said, it is high time that India and Pakistan take concrete steps to resolve the long-pending dispute to ensure lasting peace in the region. The spokesman said that there was no denying the fact that Kashmir dispute was the main reason of tension and rift between the two nuclear neighbours and unless this issue was resolved in accordance with the wishes of the people of Jammu and Kashmir, India and Pakistan would continue to remain at loggerheads. The spokesman said that the Kashmir dispute had become a nuclear flashpoint between the two countries and because of this very issue three wars were fought by India and Pakistan which resulted in huge destruction of life and property on the both sides. He said that Hurriyat leadership had always advocated better relations between the two arch-rivals and supported sustained parleys for the resolution of issues. The spokesman urged India to shun its rigid and stubborn approach and initiate measures for settlement of the Kashmir dispute so that endless sufferings of people of Kashmir and the people of South Asia are mitigated. He also urged the United Nations and other world bodies to play their role in ending the border skirmishes between India and Pakistan and encourage both the countries to peacefully find out a resolution of the decades-old conflict. KASHMIR VOICE 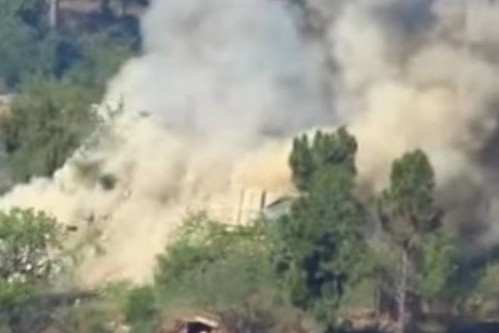 ← Gunmen Attack Paramilitary Camp near Srinagar Airport.
Muslims of Jammu on the target of Extremist Hindus →