Srinagar, October 04 (Kashmir Voice): In occupied Kashmir, the Chairman of All Parties Hurriyat Conference, Syed Ali Gilani, has said that under the shadow of gun, the life, honour and dignity of the people of the territory are at stake and they are feeling insecure.
According to media sources, Syed Ali Gilani said this while referring to loss of precious lives in cross border skirmishes between India and Pakistan, unprovoked statements related to complete integration of Jammu and Kashmir with India by BJP and RSS leadership and recent braid-chopping incidents in the occupied territory. Syed Ali Gilani in a statement in Srinagar termed the situation as extremely worrisome saying that in occupied Kashmir, under the shadow of gun, people are living a miserable life and in an atmosphere of uncertainty. He said that BJP and RSS leadership was ignorant about sensitive nature of the Kashmir dispute and illegal tricks and follies could never do away with this serious issue. â€œMillions of people are affiliated with this issue and India since last 70 years utilizing its military might and deceit, failed to change and alter its nature,â€ he said. The APHC Chairman calling upon India and Pakistan to observe restraint said, God forbid any flare can culminate into a full-fledged war in South Asia and none can bear aftershocks and devastations of it. He said that it was wise for both the countries to avoid horrors of war as it guaranteed the stability and tranquility in the region. â€œThe cross-border skirmishes and shoot-out between the troops of Pakistan and India on the Line of Control have resulted into massive death and destruction of human lives, livestock and crops. International community should take serious and effective diplomatic steps for final and lasting solution to the Kashmir issue,â€ Syed Ali Gilani said. He maintained that the loss of precious lives is painful and a serious issue for entire humanity. â€œFor how long will India ignore the historical facts of the issue and deceive the international community?â€ he asked. Commenting over the braid-chopping incidents, the APHC Chairman said that those involved in the heinous crime and disrespect for womenfolk were worse than Satan. He asked the people of occupied Kashmir to maintain unity among their ranks and said that they should organize mass movement and strive against this troublesome situation to frustrate all such nefarious and inhuman designs as had been done in the past. KASHMIR VOICE 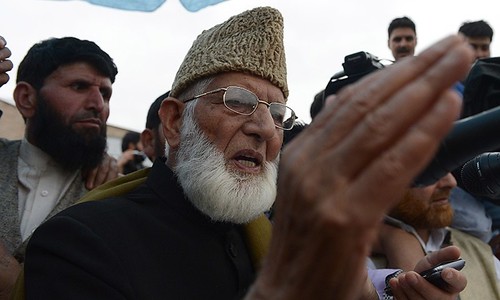