Srinagar, October 09 (Kashmir Voice): In occupied Kashmir, fresh braid-chopping incidents were reported in Srinagar, Kulgam, Pampore, Shopian and Baramulla, causing protests and clashes between protesters and Indian forcesâ€™ personnel.
According to media sources, in Khrew area of Pampore, panic spread after the braid of a middle-aged woman was mysteriously chopped. She was found in an unconscious state, with her braid cut. The woman was immediately taken to a nearby hospital. Locals held protests against the incident. The market in the area remained closed for the entire day. In Firdousabad locality of Batamaloo in Srinagar, the braid of a woman, in her 40s, was cut in mysterious circumstances. Her family said that she was standing on the plinth of her house when her braid was cut. The family also said that her earrings were stolen. Clashes broke out in the area between police and locals after the incident. Police restored to teargas shelling while the youth pelted stone on police. Protests were also reported from Laseerpora Noorabad area of Kulgam after the braid of a young woman was chopped. Locals came out on the roads to demand the arrest of culprits. â€œThis was the second attempt when the lady was attacked,â€ a local told media persons. Another incident was reported from Dardparen Khuri Batpora village of Kulgam where the braid of an elderly woman was chopped. A similar incident of braid-chopping was reported from Wachii area of Shopian but could not be confirmed. Another incident of braid-chopping was reported from Baramulla town. As per the family, the braid of the girl was chopped in her room by some unknown persons who sprayed her face, leaving her unconscious. The culprits fled soon after, the family members said, adding that the girl was rushed to District Hospital Baramulla for treatment. KASHMIR VOICE 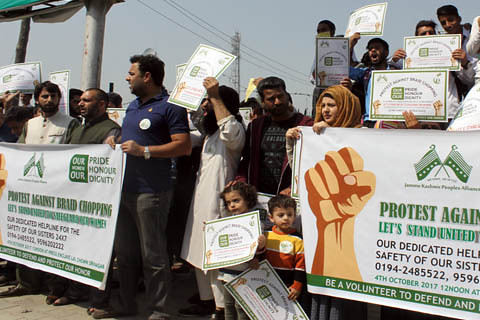