Srinagar, October 09 (Kashmir Voice): In occupied Kashmir, an Indian army officer was killed after suffering a bullet injury in Badgam district, today. According to media sources, the officer received a bullet injury in his thigh during a late-night search operation in Drung village of the district. He was rushed to a local hospital where from he was referred to Srinagar where doctors declared him as brought dead. Hospital sources told media that the deceased, identified as Subedar Raj Kumar of 53 Rashtriya Rifles stationed at Drang, had received a bullet injury in his left high and succumbed due heavy blood loss. Srinagar-based Indian army spokesman, Colonel Rajesh Kalia, confirmed that the subedar was killed in cross-fire. â€œA patrol party of a local army camp came under fire in Drang village. The fire was returned. However, one army man was killed in cross-fire,â€ he added. KASHMIR VOICE 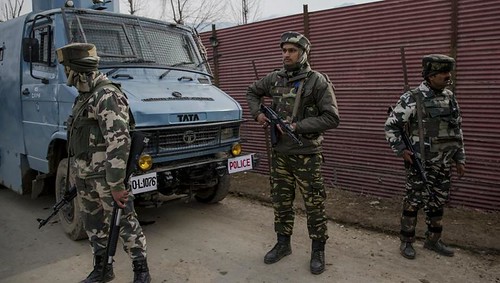