Jammu, October 09 (Kashmir Voice): In occupied Kashmir, Rashtriya Swayamsevak Sangh (RSS) workers took out a rally in Doda to scare Muslim community members of Jammu region. According to media sources, the RSS Pracharaks wore full length pants unlike past. The RSS march started from Ramleela ground and after passing through various markets and roads including old hospital road, bus stand, Dak bunglow road and culminated at Rameela grond Tonndwah, Doda. Majority of the Muslims took the RSS rally an attempt to incite communal trouble in the region. â€œWe donâ€™t understand the fun and motive of this march. We even donâ€™t understand why the authorities allow such rallies given the fact that the region is restive and an ordinary incident has potential to snowball into a major controversy,â€ said a Doda cleric. â€œThe authorities are acting irresponsibly by promoting RSS in this sensitive region as was seen in todayâ€™s case and a similar one that took place in Bhaderwah town some days back,â€ he said. KASHMIR VOICE 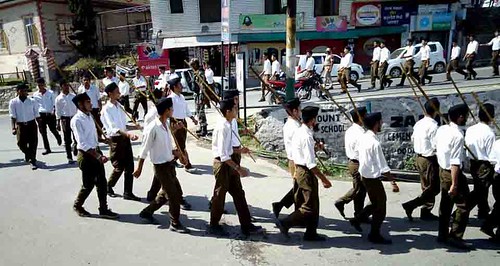