Srinagar, October 09 (Kashmir Voice): In occupied Kashmir, complete shutdown is being observed in all major cities and towns of the territory against growing incidents of braid-chopping in the Kashmir Valley. According to media sources, strict restrictions are imposed in the areas of Khanyar, Rainawari, Nowhatta, Maharaj Gunj, Safa Kadal, Maisuma and Kralkhud in Srinagar to prevent protests. All shops, public transport and educational institutes remained closed in Srinagar and all other districts of the Valley. Roads wear a deserted look in Islamabad town. The authorities have suspended train service across Kashmir in view of the shutdown call, given by the Joint Resistance Leadership against the unabated braid chopping incidents in the Valley. More than sixty incidents of braid chopping have been reported from across the occupied territory during the past few weeks. Braid choppers either spray some chemical on the face of women to make them unconscious or grab them forcibly and then cut their braids. At many places, people caught hold of the braid choppers; however, they were rescued by the troops and Indian police. Meanwhile, Indian forces used brute force on people who took to the streets to protest against ongoing worst situation in Kashmir. Clashes were reported between protestors and Indian forces in Seer Hamdan area of Srinagar till last reports came in. KASHMIR VOICE 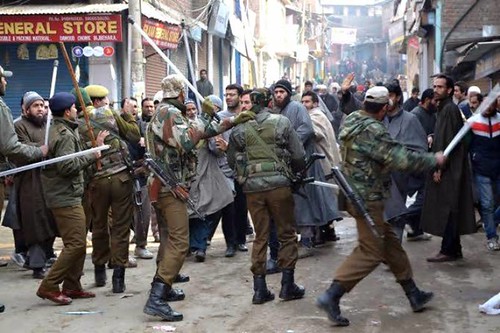