Srinagar, October 17 (Kashmir Voice): In occupied Kashmir, fresh incidents of braid-cutting triggered protests and clashes in Srinagar, Baramulla, Pulwama and Ganderbal districts.
According to media sources, people including women and youth took to the streets in Maisuma area of Srinagar after a woman said that braid choppers cut her hair. The protesters raised pro-freedom and anti-India slogans and tried to march towards Lal Chowk. Shopkeepers downed their shutters in protest. Clashes broke out between the protesters and Indian police personnel, who fired dozens of teargas shells and pellets on the protestors injuring many including Suhail Ahmed, a photographer working with an Urdu daily. He was referred to a Srinagar hospital for treatment. The clashes later spilled over to Budshah Chowk, Habba Kadal and other parts of Srinagar triggering shutdown in many areas. The protestors said that the police were shielding the culprits. In Baramulla district, two fresh incidents of braid chopping were reported. The braid of a girl in Shalteng Sheeri area of Baramulla was cut second time on Monday during the past three days. The incident happened when the girl was in the compound of her house. On Saturday, the same girl was targeted by braid choppers, cutting a portion of her braid. The incident sparked protest in the area. Meanwhile, lawyers took out a protest march in Baramulla town against the unabated braid chopping incidents. The protesting lawyers were led by Advocate Neelofar. Tension gripped Sopore town when the braid of an elderly woman was chopped off in Hardushiva Zaingeer area. This was the fourth such incident in the area in less than 24 hours. The incident triggered shutdown in the town. Complete shutdown was also observed in Pampore area of Pulwama district against the braid-chopping incidents. Braid choppers also cut braid of a teenage girl at Manigam in Ganderbal district. The victim is a 7th class student and had returned home from school when the incident happened. The Kashmir Valley has so far witnessed over 100 braid chopping incidents. Earlier, more than 250 such incidents had occurred in Jammu region of occupied Kashmir. The braid choppers cut hair of women after knocking them unconscious with some spray. On the other hand, the President of Central Coordination Committee of Imams of Mosques in Jammu and Kashmir, Maulana Syed Waris Shah Bukhari, led a demonstration at Press Enclave in Srinagar against the unabated incidents of braid chopping in occupied Kashmir. The patron of Imams of Mosques in South Kashmir, Hafiz Abdur Rehman Ashrafi, in a statement also expressed concern over the disgraceful incidents of braid-cutting in the territory. KASHMIR VOICE 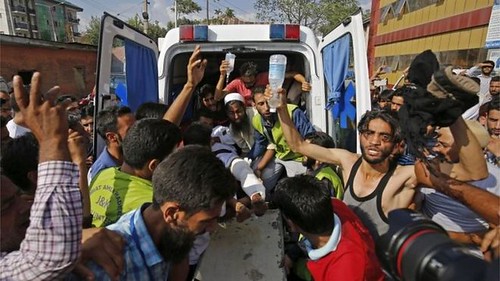 ← Braid Chopping Left Womenfolk in Distress: Mirwaiz Forum
Military is not a Solution to Kashmir Issue →