Srinagar, October 22 (Kashmir Voice): In occupied Kashmir, Hurriyat leaders, Shabbir Ahmad Dar, Muhammad Iqbal Mir, Muhammad Ahsaan Untoo, Imtiyaz Ahmad Reshi and Ghulam Nabi War have paid glowing tributes to the martyrs of Bijbehara.
According to media sources, the Hurriyat leaders in a joint statement issued in Srinagar said that the sacrifices of Kashmiri martyrs would not be allowed to go waste. They said Kashmir martyrs have center staged the Kashmir dispute and because of the sacrifices of martyrs world on humanitarian grounds wants to resolve it. They said that more than 40 people were martyred and hundreds were injured by the BSF troopers in Bijehara on October 22, 1993, when the people of the area held a peaceful demonstration against the siege of Hazratbal shrine by Indian Army. KASHMIR VOICE 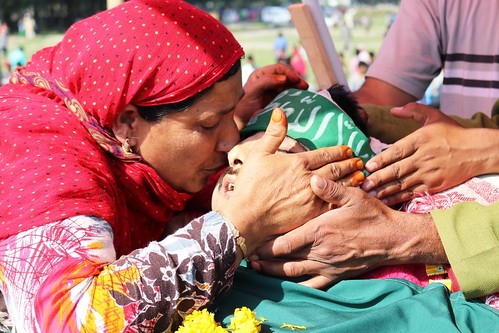 ← Shutdown in IOK against Braid-Chopping Incidents Restrictions Continue in Srinagar to Prevent Demos
Woman Shot Dead, Another Injured in Tral →