Srinagar, October 21 (Kashmir Voice): In occupied Kashmir, complete shutdown was observed, today, to register protest against the unabated incidents of braid-chopping masterminded by Indian secret agencies to create a sense of insecurity and fear-psychosis among the masses particularly womenfolk.
According to media sources, call for the shutdown was given by the Joint Resistance Leadership comprising Syed Ali Gilani, Mirwaiz Umar Farooq and Muhammad Yasin Malik. The leaders had also appealed to the people to observe civil curfew, today. All shops, business establishments and educational institutions remained closed while traffic was off the road. The Kashmir University, Srinagar, had postponed all the exams scheduled for today. Meanwhile, the puppet authorities continued to impose restrictions in Srinagar for the second consecutive day, today, to prevent people from staging demonstrations against growing incidents of braid cutting. The restrictions have been imposed in Nowhatta, Maharaj Gunj, Rainawari, Khanyar, Safa Kadal, Maisuma, Kralkhud and other areas. The authorities also suspended train service in the territory. It is to mention here that more than 150 incidents of braid chopping have been reported in the Kashmir Valley in the last two months. The residents say that the agents of Indian secret agencies make the women unconscious by spraying some chemical and then chop their braids. They say that these disgraceful actions are aimed at terrorizing and harassing the people particularly women. KASHMIR VOICE 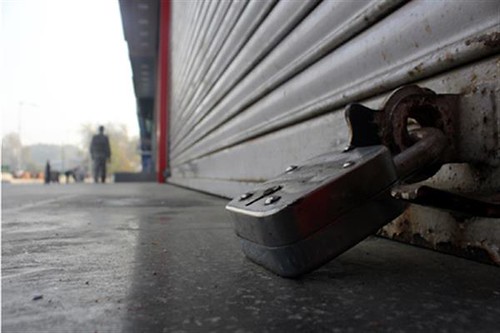