Srinagar, October 22 (Kashmir Voice): In occupied Kashmir, the personnel of Indian Border Security Force (BSF) involved in the killing of over 40 civilians including 25 students on this day in 1993 in Bijbehara are yet to be punished, despite passing of 24 years.
According to media sources, 43 civilians fell to the bullets of BSF when they were peacefully protesting against the military siege of Srinagarâ€™s Hazratbal shrine. The massacre had triggered massive protests across the occupied territory following which the puppet administration had ordered a magisterial enquiry into the incident. The massacre was carried out by the 74th Battalion of BSF and the unit was shifted from the area after the probe started. The enquiry report prepared by the Enquiry Magistrate Bijbehara and submitted to the puppet administration on November 13, 1993, concluded that firing upon the procession was absolutely unprovoked. The report had indicted the then Deputy Commandant of the BSF unit, JK Radola, for giving tacit approval for indiscriminate and un-provoked firing. The Magistrate had recommended immediate dismissal of the involved BSF men and initiation of criminal proceedings against them. Thirteen BSF troopers were charged with murder after the orders passed by Indian National Human Rights Commission. However, the General Security Force Court trial had acquitted them. The residents said that 25 students were massacred in a playground at New Colony in Bijbehara. â€œThey were playing cricket when the BSF men fired upon them. This playground turned into their graveyard,â€ they added. The locals said that the BSF had tried to cover up the massacre by claiming that some of the slain youth were militants. â€œHowever, when BSF came to know that one of the victims was a Kashmiri Pandit identified as Kamal Ji Tikoo, they dropped the allegation,â€ they said. One of the deceased students was a 16-year-old orphan, Muhammad Shafi Hamdani. His mother also died some time later, leaving behind three daughters. Another 16-year-old orphan, the only son of his parents, Manzoor Ahmad Badroo also lost his life, leaving behind his ailing mother and five sisters. Afroz Ahmad, 11, a student of class 5 was another victim. Locals remember most of these boys as good cricketers who often played cricket at the public park in the New Colony, Bijbehara, as the sports ground was used by the youth who were elder to them. â€œNo space was left in the local graveyard as well as the martyrsâ€™ graveyard so we buried them in the same public park they used to play,â€ said Abdul Rasheed Waza whose nephew Javaid Ahmad was also killed in the massacre. KASHMIR VOICE 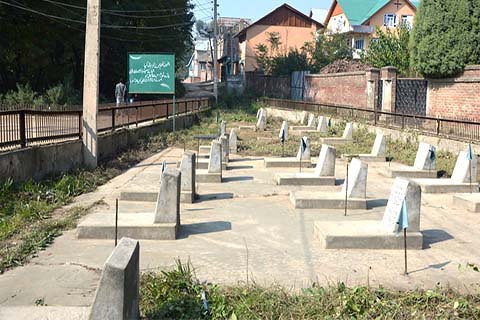