Srinagar, October 24 (Kashmir Voice): In occupied Kashmir, the Chairman of All Parties Hurriyat Conference, Syed Ali Gilani while paying glowing tributes to Bijbehara martyrs has appealed to the United Nations to impress upon India to stop killings and other human rights violations in the territory.
According to media sources, Syed Ali Gilani in a statement issued in Srinagar said, â€œThe blood of these martyrs will not be allowed to go waste and Kashmiris will never forget the sacrifices rendered by the victims of these heart-wrenching massacres.â€ He appealed to the world human rights organisations including Amnesty International to use their good offices to bring to book the perpetrators involved in such heinous crimes against humanity. He said that as long as Indian forces were present in occupied Kashmir such pain giving events would continue to occur and it would further add to the never-ending situation of uncertainty in the territory. Indian forces have perpetrated hundreds of such gruesome massacres including Bijbehara, Gawkadal, Sopore, Handwara, Bandipora, Kupwara, Zakura, Wadhama, Chattisinghpora. â€œDuring their freedom movement, Indians witnessed one massacre of Jallianwala Bagh while we have witnessed several such incidents for the last seven decades,â€ the APHC Chairman said. Syed Ali Gilani in his appeal to the United Nations said, unless the Indian forcesâ€™ atrocities are checked and probe initiated against killers and perpetrators, the human rights violations will go unchecked. â€œThe international community should come to the rescue of Kashmiris and help to stop genocide and initiate action against perpetrators of these massacres, as was initiated against Serb militia in Bosnia Herzegovina,â€ he demanded. Commenting on the killings in Tral and Arwani, the APHC Chairman said innocent killings can prove detrimental for the ongoing freedom movement. KASHMIR VOICE 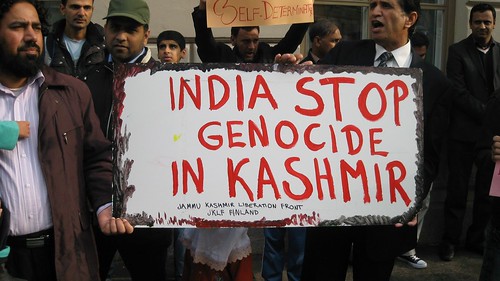