New Delhi, October 24 (Kashmir Voice): Indiaâ€™s National Investigation Agency (NIA) arrested Shahid Yousuf, son of United Jihad Council (UJC) Chief, Syed Salahuddin, in New Delhi, today.
According to media sources, Shahid was summoned by the NIA to Delhi for questioning in a fake case registered against him in Delhi in 2011. However, he was arrested on his arrival in New Delhi. Shahid Yousuf is a resident of Soibugh area of Budgam Shahid and works in the horticulture department. He was served the summons on October 16 to present himself before NIA investigators at their New Delhi office, today (October 24). Shahid was earlier questioned four times by the NIA sleuths at their Humhama office in Srinagar. He was questioned about his family and the NIA sleuths had taken possession of his mobile phone as well. KASHMIR VOICE 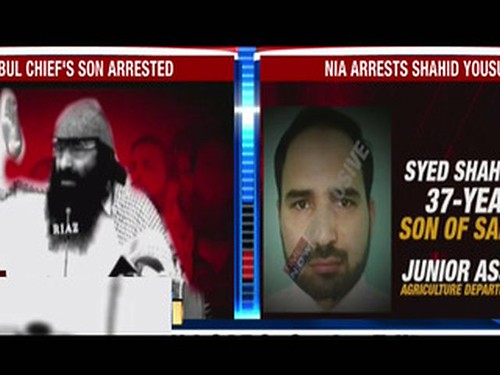